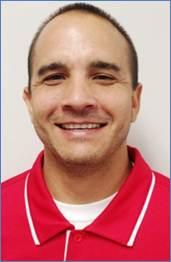 Former member of Pirates’ 2000 state championship team transitions from the men’s basketball coaching staff. The Porterville College women’s basketball team will be led by a new – yet familiar – face this season, as Jeremy Parker has accepted a one-season head coaching assignment. Parker spent last season as the lead assistant for the PC men’s team under Rob Haynes. He was instrumental in helping develop four All-Central Valley Conference players and handling various duties for the program. Parker, 35, is also PC graduate, playing for the school’s 1999-2000 state title team, before transferring on scholarship to Peru State College in Nebraska. “Jeremy understands the mission of our institution and he motivates students to reach their full potential,” said PC athletic director Eric Mendoza. “Our student-athletes on the team are excited to learn from his coaching style. He brings positive energy and his passion to help students grow is evident. Jeremy believes in teaching life lessons through basketball and I think our community will see that in the program.” Parker inherits five returning players and welcomes 10 newcomers – including six coming from the PC volleyball team. “I’m grateful for the opportunity,” Parker said. “I’m encouraged by the turnout and the team’s willingness to work hard and buy-in to my philosophy. During these next few weeks, we’ll be testing their abilities as well as their commitment. Overall, I’m optimistic about the future and we look forward to a successful season.” Parker, who also works as assistant athletic director at the Porterville Church of the Nazarene, is currently taking courses from Ashford University to complete his bachelor’s degree in sports and recreation management. His first stint at PC was as an assistant from 2004-05. Parker, affectionately known as “Coach JP,” later worked for the Porterville High School boys’ program from 2008-2013 at various levels, including freshman and junior varsity head coach. Haynes hired Parker last season, as they joined forces to coach at their alma mater. “Jeremy is a hard worker – that’s the type of player he was and the type of coach he is,” Haynes said. “He teaches the details of the game and the team will benefit from that. He’s great at scouting reports and breaking down opposing teams to their tendencies. He’s a student of the game. I expect the team to be fundamentally sound.” In addition to graduating students and developing player growth, Parker said his goals include integrating the team into the community. “Our team will be active with various outreach projects in Porterville,” he said. “From visiting K-12 schools and volunteer work, it’s important that our student-athletes are young role models in the community. We hope the community will also support our team with improved attendance at home games. I think we will be an exciting team to root for.” After “Pirate Madness 7” on Oct. 23, Parker and the women’s team will make their official debut on Nov. 7 at the Mission College Tournament in San Jose.

Email marketing@portervillecollege.edu for any media inquiries!