Skip to main content
VACCINATION REQUIREMENT: To preserve the health and safety of students, faculty, staff and the community, everyone on campus must wear a mask & provide proof of COVID-19 Vaccination by 11/01/2021. 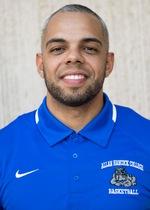 After competing at the High School level at John F. Kennedy High School in Bronx, NY, Fermin began his career at the Junior College level at Missouri State and Hagerstown Community College. He then went on to play Division I ball at Cal Poly, San Luis Obispo, where he graduated with his bachelor’s degree in history.

During his senior season at Cal Poly, he led the Big West Conference with 119 assists, and helped the Mustangs reach the program’s second-highest victory total in 18 Division I seasons. He comes to us directly from Allan Hancock College where he was the Lead Assistant Coach and Recruiting Coordinator for 5 seasons. He also served as the West Coast Elite UA Central Region Program Director.

PC Athletic Director Joe Cascio shares coach Fermin’s excitement for the future of Pirate Basketball. He adds, “I couldn’t be happier to have Coach Fermin join our coaching staff. He brings a wealth of experience, both as a player and a coach. He has a natural ability to relate to students at this level and has a history of putting those students in a position to be successful, both on the court and in the classroom. We are very fortunate to have him as part of the PC family.”

PC President Dr. Claudia Habib shared her excitement for the arrival of Coach Fermin, “I am overjoyed that we are able to add Coach Fermin to the PC family, his extensive basketball career as a player, in the US and abroad, as well as his community college experience as a student and assistant coach, will inspire our students. After such a difficult year for our Student-Athletes, it is great to have them back on the court. I can’t wait to be back in the stands next Fall to cheer on our PC Pirates!”