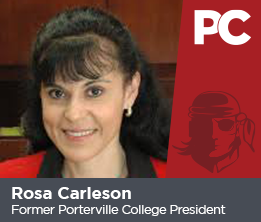 The following information on former PC president Rosa Carlson is from a Porterville Recorder article:

Not many people live most of their lives in school, but Rosa Carlson has always attended, either as a student, as an educator, or as an administrator.

She hangs up her mantel as president of Porterville College after 11 years for a quiet life, and more time with her family. Carlson announced her plans for retirement a few days ago, but says it wasn’t a sudden decision. She had been planning her going away for some time now.

“My retirement, I’ve strategized every single step of how I was going to retire and planned when I was going to announce because I did not want to hurt Porterville College,” said Carlson.

Her contributions for PC span and vary widely through her time serving as president. As soon as she started her transition from College of the Sequoias (COS) to PC, she began working and planning to make the college an institution much better equipped for students who plan on receiving their degrees.

“I came in the middle of the year, I came in January, we didn’t have facilities, plans, anything, so we almost lost the library,” said Carlson. “So we did remodel the old library, build the new library, the other new building that we built since I’ve been here was the fitness center, and since then I have a list of capital projects for the college.” Carlson also made sure to remodel the math and science labs, that were started the same year that she arrived.

She was urged into taking the position of president by former interim president of PC, Lincoln Hall, because he was sure she would make a good fit for the college, and sure enough she did.

Carlson grew up in Fresno and has lived all of her life around the Valley, and just like many students out of high school, and like many students who attend PC, she did the practical thing and attended Fresno City College before transferring to California State University, Fresno.

After earning a bachelor’s in Foreign Language, a master’s in Administrative Education, and a doctorate in Education, Carlson started her long span in education in the high school system by teaching five years English as a Second Language (ESL) for the Fresno County Office of Education. Then she went on to become an educator at Reedley College, moving her way up, then becoming vice president of COS, and finally making her move to Porterville College.

Apart from the many new facilities and buildings Carlson has put in place, she has kept the college an integral part of the community. She has made sure to have a good relationship with the neighboring school districts, working together to offer more than 40 college courses to high school students who wish to transfer to four-year institutions without the added debt of the first two years.

“One of the big pluses for us is dual-concurrent enrollment, because we are very, very linked with the Porterville Unified School District, and with Burton School District, we’re trying to track their career paths, so that they can come here for one year or one year in a half and then move on,” said Carlson.

Sharon Kamberg, superintendent of Burton School District, commented on the all the great work Carlson has done as a leader and throughout the community.

“She is a visionary leader that has truly impacted the community of Porterville, most colleges do not put the effort and time that she does,” said Kamberg. “We will miss her very much and whoever takes her place will have very big shoes to fill.”

Ken Gibbs, superintendent of Porterville Unified School District (PUSD), also remarked on the beneficial relationship PUSD has had with PC, and was hoping she could stay a few more years, but understands her reasons.

“I’ve been very fortunate to work with Dr. Carlson, she has been a great leader in the educational community, and she will be truly missed,” he said.

Carlson will miss the work and her colleagues.

“We’re a family here and we enjoy each other, their’s no backbiting or snickering, I call us a family cause we are like brothers and sisters, especially faculty, and administration sometimes we agree to disagree, but when anything bad happens on this campus, we put our differences aside,” said Carlson.

She has already made sure that in some way or another, whoever takes over will continue her goals for the college.

“I want to make sure that an internal person will follow up interim so that there is continuity, because people trust my team, and we want to keep that continuity going,” said Carlson. “Don’t know what the board is going to do, but that is part of my strategic planning to leave continuity.”

The mayor of Porterville, Milt Stowe, also complimented on the work Carlson has put into the college.

“She’s going to be a great loss, and I hope she sticks around. She has done so much for us, she brought instructors in, she brought in staff, and the college has really become a team,” said Stowe.

In addition, you can read the announcement of when Rosa was hired, as reported by the Hanford Sentinel: Porterville College names new president: Rosa Flores Carlson of Hanford takes the school's helm.